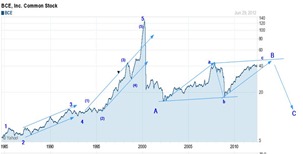 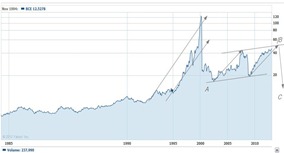 As you can see some eight months ago, the stock had already been as high as $42.50, we thought it could go a little higher (about $50) but that there was not that much left in it. Other than time passing by nothing has changed. The stock could still go to $50, which would represent another 10% or so from the present $46, roughly. We would advise a tight stop however, as we are near a point where things can get a little nasty, if for no other reason than that they have been so nice. Here is why on a chart; 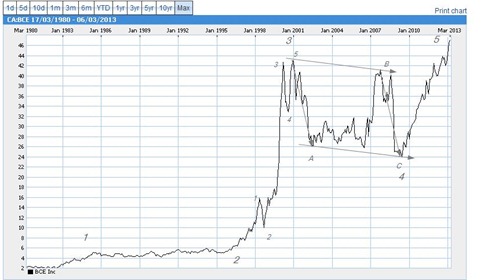 This is using the MSN chart, monthly and arithmetic , instead of the Yahoo semi-log chart. Not only is the difference rather startling, proving once again that you can prove most anything with a chart, but the implication to be inferred , at least from an EW perspective, is that we are in a 5th wave that is now about 62% of the extended 3d wave influenced by Nortel. Not only that but the straight line, no interruptions performance over the past 3/4 years is indicative of pure thoughtless momentum buying, something that can go on for ever provided the value of money is debased, or it can stop for no particular reason. From a risk/reward perspective the time seems right to either use the tight stop loss or get out. 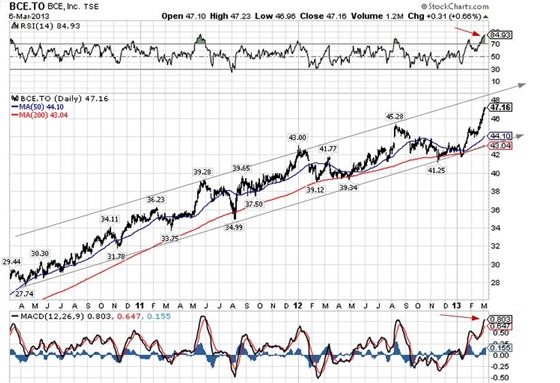 For an incorrect count see previous blogs. We will not give it another try but nevertheless we doubt that this stock will rise above $48.50! To stick around for so little is not sensible.