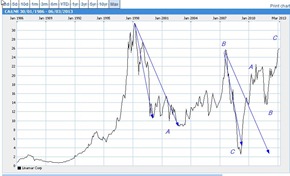 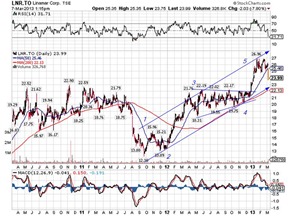 LNR, Linamar is an excellent company in an industry (automobiles) that has a grotesque amount of over capacity plus a degree of nationalism that is only exceeded by the airlines. It just got downgraded by RBC which is not a matter of concern. What is , is the chart. Quite apart from EW, it is worth noting that much of this company’s stock climb occurred in just a few years. It has only been higher than it is today for perhaps a single year in the past 25+ years. Moreover it has been breathtakingly volatile.

The larger chart can be read to mean that a large wave 4 completed at the recent low and that we are in the process of tracing out wave 5. If, and it is a big if, that were correct wave 5 would reach double top levels in a mere $4 from here. Not a lot. Looking at the shorter term chart there appear to be a clean 5 waves up from the lows of $12.30. There is also a distinct 4th wave triangle which, by itself , calls for a drop back to about $19 or so. On balance we would exit counting how lucky we were, twice!