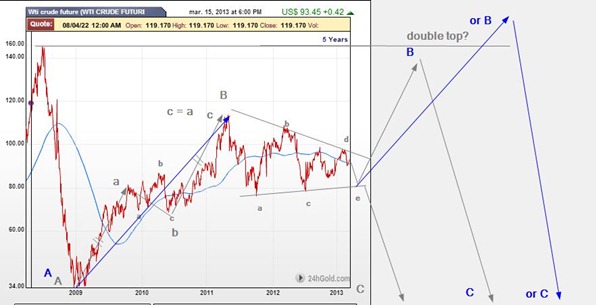 The way most of us approach the markets is that we first formulate a preconceived idea, from our gut, wet finger, or financial gossip, whatever, and then proceed to justify that position by rationalizations or other, supposedly very scientific,  methods. EW is always happy to accommodate almost  any idea. That does not render it completely useless, but it does mean that a high degree of care is required.

Here we have the West Texas oil futures. The chart looks like it is on a semi-log scale. There appears to be a triangle forming  roughly around the $90 level and roughly in the middle of the chart. So far it has consumed two full years and probable is not yet complete as the e-leg is a tad short. If, for the sake of argument , we assume that this is indeed a triangle, then we know that these can only exist in either a wave B in a counter-trend move, or in wave 4 of a 5 wave sequence (this is empirically determined, not deducted from some theory). In the latter case wave 5 should take the futures to the level where they double top. Much higher is very unlikely as wave 3 would become the shortest. Given also that the move from the lows of $34 to about $110+ is a very distinct a-b-c itself, we do not for a moment believe that it is a wave 4 triangle. Therefore it is probable a B wave triangle as in the X of an a-b-c X a-b-c. This could take the stuff well beyond the double top level, after which it would collapse as otherwise it would not be a B-wave to begin with.

The third possibility is that there is no triangle at all, just a series of two 1-2s. Often the “look” is pretty well identical but the outcome definitely is not. In this scenario the B-wave is complete at the $110+ level and we have been working our way down for the past two years, however with little real progress. That could change if $80, give or take, breaks.

The way to play this then is very much along the lines of Mark Twain’s advise when he said that there are two times when you should not dabble in the market, when you don’t have the money and when you do. Here you should pass between $80 and $95 and only play outside that range, long or short, time will tell. Just do not get caught with too many oil stocks if the stuff does come down, as I believe it might.