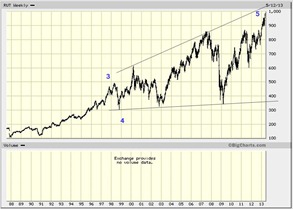 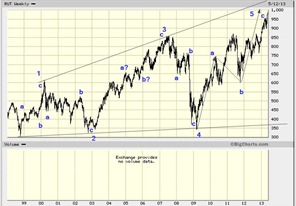 See our previous blogs on the Russell 2000. This is a small cap index that is reconstituted every year in order to stay “representative”. We show this structure not because we are confident that it is correct, but simple because it does suggest that we are at or near a peak of sorts. Theoretically we fully understand that the sky is literally the limit for any asset if you reduce interest rates to zero permanently. But this is reducing the argument to absurd levels as practically it is impossible to reduce interest rates forever to zero, if not would not everyone have used this all the time long before Bernanke (and Greenspan) adopted it as the official state policy. The Roman Empire would still exist and Britain would still rule the waves.

What we have in the above charts is a very clear example of an expanding diagonal triangle. That is a mouthful but what it means is that we are at the end of the ride as these structures are 5th waves. They follow the 3-3-3-3-3 format and have overlap which is normally not encountered in impuls waves. They usually retrace right back to their base, in this case 300. Normally the upper trend-line is reached, or briefly exceeded in a throw-over. The very nice characteristic about this chart is that there is absolutely no ambiguity whatsoever the way there is with the Dow or S&P. Presently we are ten ticks away from an even 1000 (up 3X+ in 4 years!.) The p/e is supposedly about 18 which is high. The chart is moving up at a rate of about 50 ticks a month, with the line at about 1050 this should be done in a month or so at the most. Also if the 2000 tech bubble was a bubble, and the 2007 bubble was a bubble what would you call 2013. And yes we are perfectly aware that one can only recognize a bubble after the fact, that is if you work at the Fed.