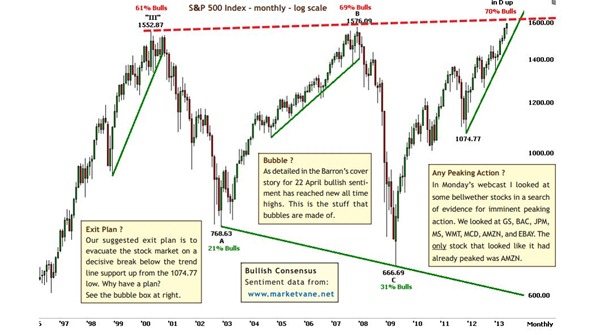 This is the latest from Walter Zimmermann , a practising EWaver at United-ICAP. (see also S&P blog April 25th) His take on the matter is quite interesting as he sees it a little differently than most others. He thinks we are tracing out a fourth wave expanding (horizontal ) triangle. To my knowledge no one else is considering this possibility (and the Gainsville boys reject it on account of the wave c being 5, not 3 waves which, under EW rules is strictly verboten). This is, of course , the S&P, but similar patterns can be seen in the Dow. If correct a steep decline in wave e should start any moment and drop to about 540 in about 2 years. That would complete the entire pattern and the 4th wave. Following that a 5th wave should take it to new highs. By the way,  this is completely different from “the jaws of death” pattern suggested by some, all though the rather extreme gyrations will be quite comparable. On the S&P we seem to be pretty well there (Zimmermann makes allowances for 1665). Put in a larger context this would be what we are looking at; 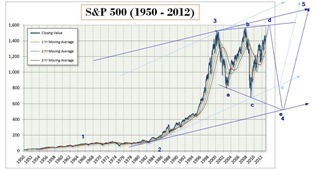 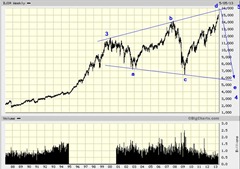 Clearly there is not much room left, either for the S&P or the Dow. Whether or not correct is an entirely different matter. But using the language of physics, clearly we are at one set of boundaries as set by the “degrees of freedom”  that is presently available. Assuming that wave e is about to start a logical time for reaching the low would be about 2016 (it does not have to go all the way to the line!). By that time this wave 4 would have lasted 16+ years which just happens to correspond quite nicely with the 16 years that (presumable then) wave 2 took, from 1966 to 1982. Time will tell