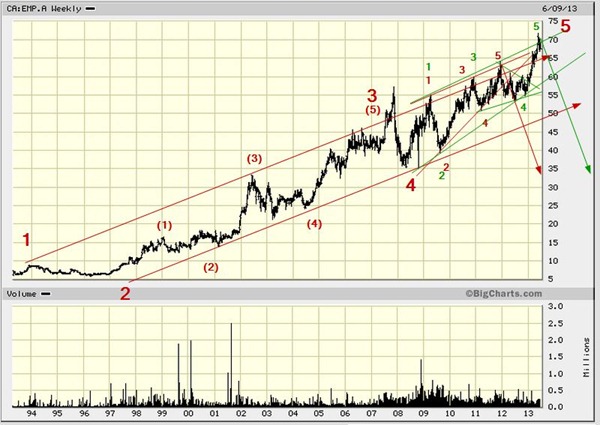 More than a year and a half ago we thought this stock had hit a high at $65, give or take. The reason was that a very nicely formed wedge had traced itself out into that peak. Turns out that that was not the peak. Probably the wedge had a 4th wave triangle to kill time (more than a year), but otherwise the structure is still a wedge. It should have peaked today.

Inline with the good=bad and vice versa world we live in ,it is perhaps interesting to note that for time immemorial the company stock  doing the take-over would decline and the subject company’s  would rise. This is simple logic that follows from the process that the respective companies go through. Furthermore the main risk is invariable that the deal falls apart, not that it comes together. So arbitrageurs typically go short the target and long the predator. Ltely this is not happening. Now both companies go up. This sort of action defies logic, but usually just for a very short period of time.