This is the Financial Times 100 index from Bigcharts. Recently it topped out for a third time at  6876, roughly at the same level  it had reached the previous two times. I do not understand EW well enough to make accurate pronouncement on what the ups and downs represent, but looking exclusively at the last up leg one can quite reliable conclude that it is a B-wave. The two perfectly equal legs with an expanding triangle intervening make that an almost certainty. In any event a drop now substantially below about 6000, we are presently at 6116,  would create overlap and limit most other alternatives (there are three possible triangle in the middle three years, an expanding one, a normal horizontal contracting one and a third one starting one phase later). Below is the more detailed picture; 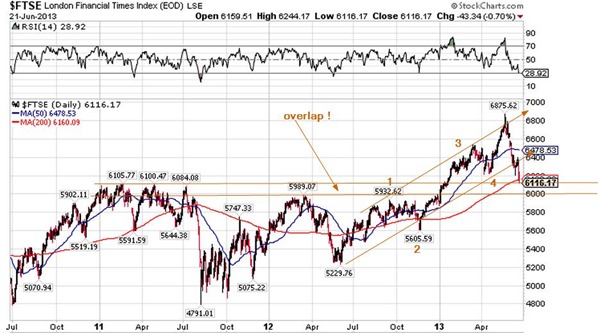 Once overlap occurs the index is likely to drop to , at least, 4800 and probable all the way to the bottom.