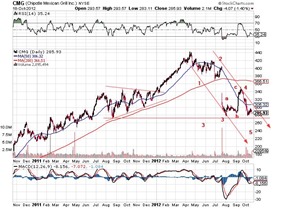 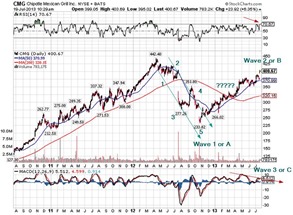 At the time the initial 5 waves down was incomplete so we were looking for a further drop to perhaps as low as $220. It did not quite make that but did get close to $233. Had you bought somewhere around that level (by the way you can almost always buy at the end of 5 waves down!) then you would have done quite nicely. We did not calculate a target but had we done so it would have been at the 50 to 60% retracement level which equates to $110 to $130 up, roughly, from the lows. That would be $334 to $366. Now that we are well above those levels it is again time to sell if you have not done so already.