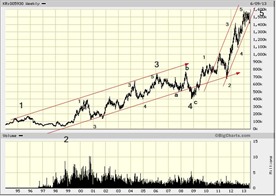 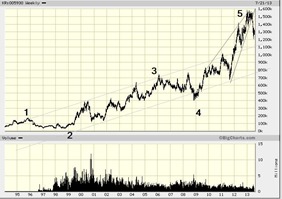 It may not look like much but Samsung has now lost 25% or 400 points. The first target is 1100k, but ultimately the stock could drop to 400k. It is the standard Schumpeter “creative destruction” process starting all over again in another country. The decline started slowly at the beginning of this year and looks like a small triangle but that simple cannot be. Instead it is probable a series of 1-2s which promises a rather rapid move down. A break of 1100k would all but confirm this scenario.