The idea of money flowing out of bonds and into equities has caught the imagination of many of the market commentators. This is another fallacy of composition. Granted that it is possible for a single investor to sell his bond and purchase more equities with the proceeds, it is not possible for “the market” to do this. For each seller there is a buyer and visa versa, ergo no money flows either in or out. This would only happen if bonds or stocks are redeemed or new ones issued. To the extent that wealth is created or destructed the value of holdings will move up or down as the “stock” of holdings, either bonds or equities are marked to market. Still no money moves from one sector to the other, this is simple a nonsensical concept.

The Bureau of Labor  Statistics is the agency responsible for compiling the employment number. They do their thing partly by interviewing a sample of the population and partly by doing some very high level math that nobody, including themselves, seems to understand. See http://www.bls.gov/news.release/cewbd.t08.htm  In the US quite a number of businesses are created and die in any given quarter, these are fabricated from thin air and than incorporated in the total number using rolling averages. For the last two very good numbers the imputed value for each was about 130,000, about 60-70% of the total, according to one source. If you try to find it on the website of the Bureau, you will see that by definition the last few entries are not there. Transparency is invariable the enemy of the truth. On hearing the numbers the markets were absolutely jubilant.

AA, Alcoa reported it’s earnings yesterday afternoon. They were horrible but beat expectations so again the market is jubilant. 91 days ago AA itself estimated earnings at $0,14 per share. 61 days ago they lowered their estimate to $0.11 per share. They confirmed that estimate 31 days ago only to lower it again to $0.7 per share 8 days ago. They earned $0.07 which is exactly half of what the market expected 3 months ago. Clearly cause for jubilation. Back in 2009 the stock hit a low of about $5. For almost two years now the stock has traded in a fairly narrow range and seems to have traced out a triangle. It may still make a new low but given that once upon a time it was nearly $50, it is obviously more a buy than a sell. Here is the big picture from a year ago and the present, detailed situation; 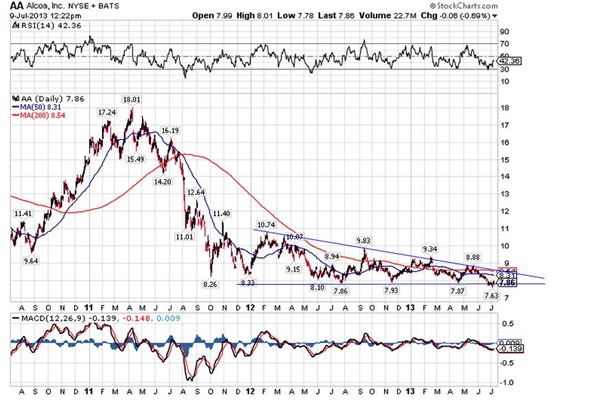