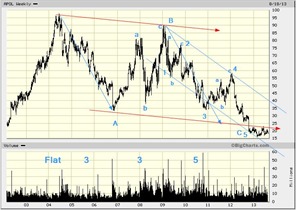 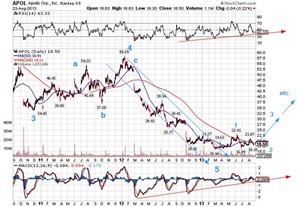 The For-Profit-Education stocks have performed badly (see also DV, Defry and ESI, ITT Educational Services) which may make them a value proposition now. Apollo Group is the most interesting one. First of all it is completely out of synch with the rest of the stock population. In early 2009 this stock almost double topped at a time when most of the stocks were making new lows. Secondly the entire pattern starting in 2004 to the recent lows of 2013 is a textbook EW sequence, that is a 9-year “flat” 3 –3 – 5 pattern. The large, unmistakeable, B-wave anchors the entire pattern. There is alternation between waves 2 and 4 of C and C is , of course, clearly a 5-wave structure. C is a little longer than A , but not by much. Also the entire construct fits in a parallelogram. From a technical point of view, it is nice to see that both the RSI and MACD have not supported the recent lows. The stock trades at a p/e of 6.87X and short interest is a whopping 23.54 % of the float. The stock shows up in three different “best-to-buy” value lists, even after broader testing of other relevant factors. A buy in our view, however with a stop-loss at $15.50 or thereabouts. An initial target would be around $30 as a minimum so the risk reward is about 1 to 6.