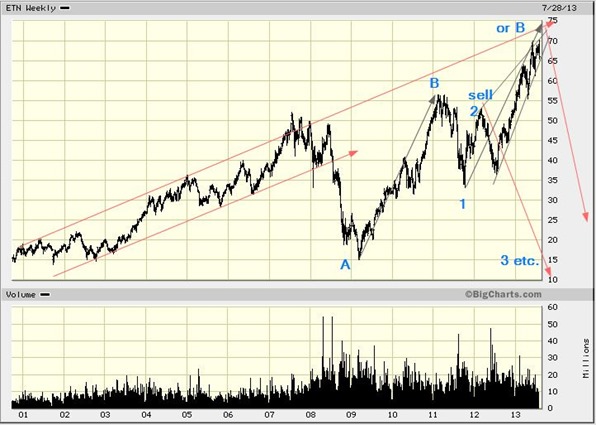 Jan. 14th of 2012 we were absolutely sure that this stock was a sell. Nice B wave followed by a first wave down and a retracement that should not have exceeded $55.  It didn’t and the stock promptly lost about 30% of it’s value. Nice but not good enough. Here we are again at $70. This time we can argue that there is another, much larger B-wave. It is rather large but perhaps not in the context of the 3.5 trillion that the Fed. has used to force you into equities. We are at the original upper trend line and would again sell any time now between here and $75. Target under EW rules is $15

By the way, if the B-wave is viewed as too large, not unreasonable, than we would have no problem with a 5th wave instead from the lows of $15. The end result, once the dust settles, should be about the same.