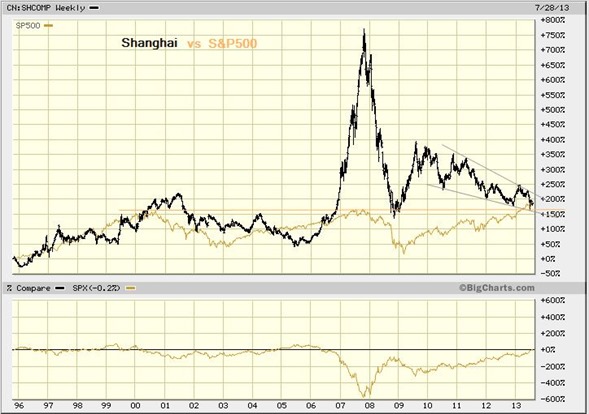 China’s economy has been growing at somewhere between 11 to 6% for the past decade or longer. In 2009 they launched a stimulus package of nearly 700 bln., which, relative to the economy was arguable larger than in the US or anywhere else for that matter. The state owned banking system has carte blanche to play fast and loose with all the normal constricting concepts such as capital adequacy, return on capital etc.etc. A more liberal environment is hard to imagine, yet the stock market is down by 2/3 from the peak and even 43% from the rebound high in ‘09. The S&P500, in contrast, is up more than a 100% from the lows and about half of that after the initial rebound.

Very judiciously I chose 1996 as the starting year for this chart. That was the year when the Maestro Greenspan coined the phrase “irrational exuberance”.  Now 17 years later we are still higher by 200%, amazingly enough on BOTH indices. China and the US performed in an identical way over that period. Today the US made new highs, supposedly on the good ISM numbers in, of all places, China. Apparently the US Pavlov dogs are better trained than those in China, and in the end, of course, it is all about the mood. The picture below from the World Health organisation might explain a lot of the difference; 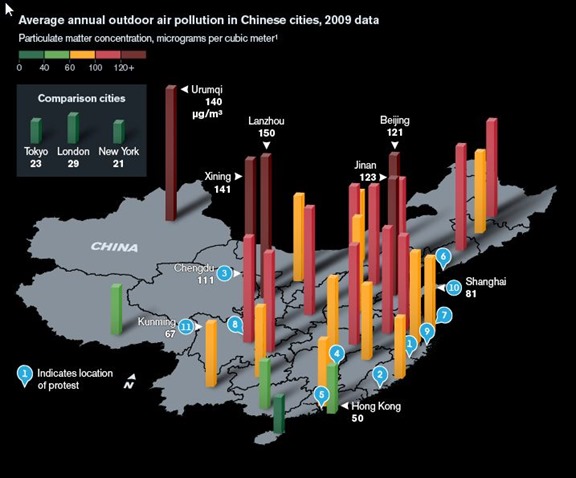 Could it be that the Americans have perfected the art and found the more profitable methods?