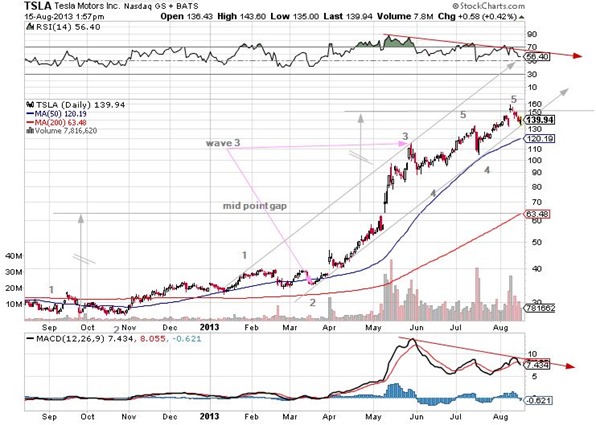 This is by request. I mention that because normally I select stocks entirely on my own which then allows me to chose those stocks that I think I understand, so there is a bias there right from the start which , presumable, should lead to better predictions. “Per request” stocks obviously do not enjoy that bias, so you are warned.

Tesla makes cars. Due to our government’s misguided interventions in this industry there is now an unbelievable over-capacity that was not allowed to destruct itself in the Schumpeter mode. So fundamentally this is not an industry to like. which is not to say that there can be upstarts with exceptionally low marginal costs that can beat out the rest. Tesla may be one of those.  From an EW point the only part that is clear is the 3d wave. Before that there are a number of 1-2s and after that a number of 4-5s. So far the drop from $159 is not 5 waves but if it goes any lower it could become that. We expect that to happen and in any event believe that a move from $40 to $160 in five months is a gift that should be taken. The RSI and MACD are already ringing the sell bell. An initial target would be about $90.