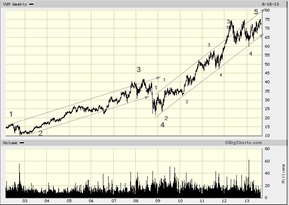 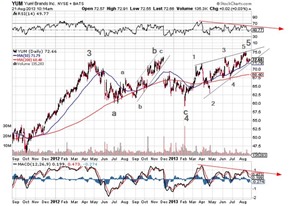 If you check previous blogs you will see that this stock looked like a sell once it reached $74. The middle top was viewed as a peak in a wedge, incorrectly as it happens. Nine months later the stock repeats the process by going a single dollar higher but now doing it in a picture perfect wedge, always a 5th wave at least of some degree. Can we be absolutely certain that this is it? No, but how about 99%. For one thing the p/e is close to 24, double the going rate, the RSI and MACD are starting to deteriorate and we are not sure that the franchise restaurant model is going to be nearly as attractive in the future as it was in the past. Our initial target would be about $20 below the peak and ultimately $22 would not be out of the question. The company , apparently, has quite a bit of exposure to China.