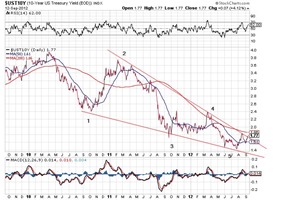 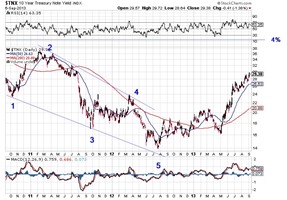 Above is another very good example of the “diagonal contracting triangle” or wedge. The charts are the then and now depictions of the US 10 year note in yield terms. Then was 18 of Sept. 2012 and now is the 8th of Sept 2013, so they are basically a year apart. The wedge is very visible and the confidence of rates going up, despite the newly launched QE infinity and all the other hoepla from the Fed, was accordingly very high. Now a year later we are at 3% coming from 1.38% a double already and we have yet to reach the initial (minimum) target of 4% which represents the “base” of the wedge. See previous blogs under 10 year or interest rates.

The same wedge can be observed on the TLT, the long bond ETF. This chart is on a price basis, not yield. Consequently the wedge goes up rather than down. Interestingly one of the main reasons for the QE’s was to make mortgages cheap to help the housing market. How well that worked is painfully obvious from the chart. A 30 point drop on the price of the long bond is about equivalent to a 25% loss on your investment and we are not even close to the initial target of about 87. 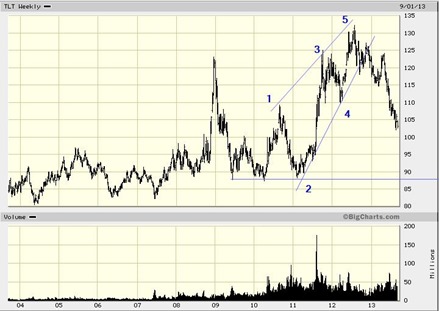