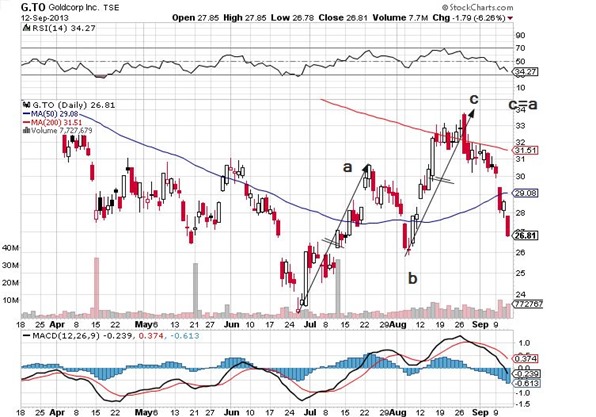 We used ABX but it really does not matter all that much which gold mining stock you chose. Essentially we perfectly caught a plus/minus 40% corrective move, well in advance. Now there remain two possibilities. First this is all there is to it and we will continue to new lows (preferred). Alternatively this is only part of the correction; it could become more complex in which case a “flat” would make the most sense. If so we are now in the B of a larger A-B-C. The B should be done in three waves. It may be complete right here or could go lower yet. Then C (in 5-waves) would take the stock back up to a little above $34. The most time consuming complex correction would be a triangle. Depending on the overall count, this could be viewed as a wave 4 and this initial a-b-c should be seen as the first and largest leg up in the triangle. Fundamentally a triangle here would, I think, reflect the tug of war that is going on at the Fed. with respect to tapering/tampering. Bernanke’s exit will perhaps force his hand, otherwise his successor may signal his own preferences in advance. The chance of getting another academic drenched in Keynesian nonsense who would embrace this same course are nil. The whole thing would end up as per below. 5th wave are often the largest when it comes to commodities so a low at say $18 or so as reflected in the chart may be much too high. 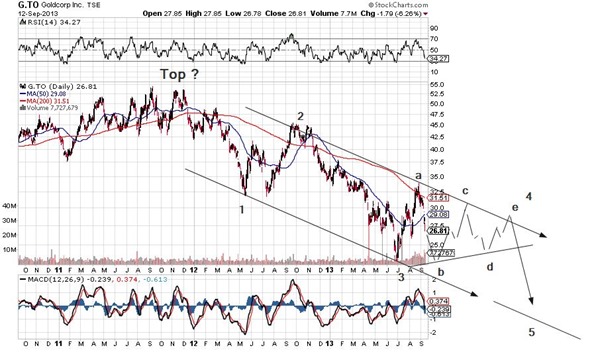 There are a few objections that could be offered against this scenario, overlap being one of them and also the top is not the true top, but this is only intended as a road map of sorts.