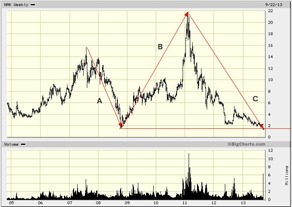 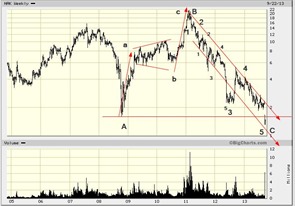 Anglo American just walked away from the Pebble Mine project in Alaska, abandoning a $500 mln. investment that it had made leaving Northern Dynasty to fend for itself. This is reportedly one of the largest ore bodies in the world, but Anglo wants to get its priorities right and evidently this prospect is not one of them. Environmental issues play a major role and with that the fact that this project figures prominently in the “No Dirty Gold” boycott campaign. The trajectory of this stock over the last six or so years tells us that the exploration business, that is finding the stuff, is only one aspect of the whole process. Unless the gold is already pored into neatly stacked loafs not more than a foot or so below the surface, a lot of things can undermine (no pun intended) the whole process. It also tells us that Elliot waves do exist. This is a perfect example of a large, irregular flat. This would have been fairly clear as the stock made the second high at about $22 in 2011. That wave is a clear B-wave!, more visible on the semi-log scale chart than on the normal one. The target, as always, is a new low. We have done that. We have no idea if it cannot go even lower but $1.31 is most definitely closer to the low than to the $22 high. If you want to get into a gold stock, this may just be a buying opportunity. By the way, Rio Tinto also has an interest in this property. 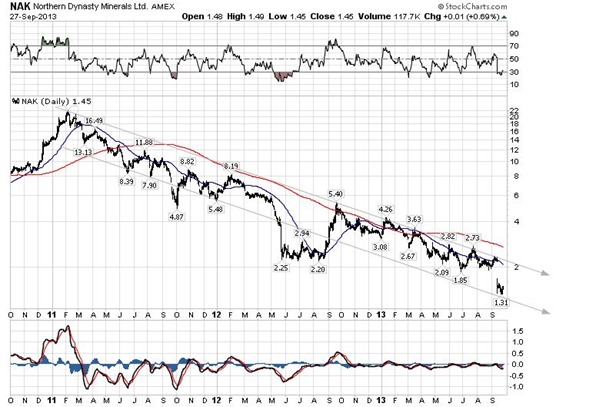