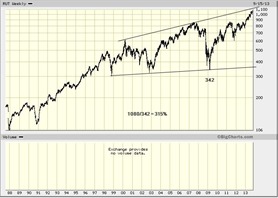 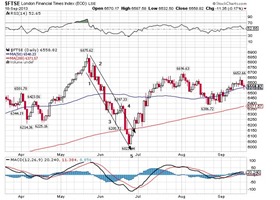 These were two of the last holdouts that we could come up with. The Russell 2000 on semi-log scale, which so far has not made a new high and the FTSE . The clear 5-waves down, now some 4 months, ago still stands. Bernanke et al do not seem to be satisfied with the results so far. The Russell this year alone is up another 38% or precisely one percent for every week of the year to date (38). To get a similar reward you would need to own 10-year treasury paper for about 19 years which just goes to show how grotesquely things are being distorted. According to Bloomberg corporations in America are now the beneficiaries of about $700 bln. in annual interest cost savings compared to 5-years ago when rates were already manipulated down by Greenspan. It is now not that difficult to argue that the largesse of the Fed’s $85 bln. flows directly and in its entirety into the coffers of corporate America, without any discernable effect on unemployment. Why all this helps remains a mystery.