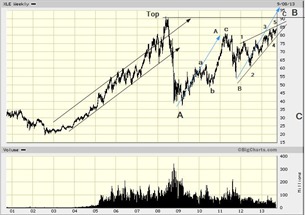 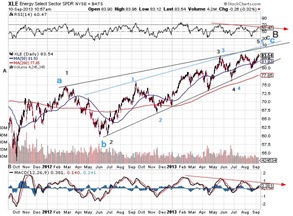 Things have changed a lot in the last so many years. Good used to be good and bad was bad. No longer. Bad is good and good is bad, or also good. Saudi Arabia used to be in middle east, now it is in the middle of Canada. The price of oil, if it rose too high, was always considered a deterrent for manufacturing and farming as it was a major input factor. Not any more perhaps because so much manufacturing has been outsourced. One thing has stayed the same, a wedge is still a wedge!! One way or another this is a wedge. The message is always the same and that is step aside. When exactly is a little more complicated, but a good rule of thumb is that you should do so before the top and bottom boundary lines intersect. In the most extreme case that would be within a year. Another good point is when something else trumps the wedge. At about $90 we will be double topping (by the way, after a whole year has passed) so should it ever get to that you should be out. Keep an eye on the RSI and MACD. Since February or even earlier, both have been ringing the proverbial bell on the exchange. They are not perfect but after a while their message becomes a lot clearer, we would suggest it already is. A sell.