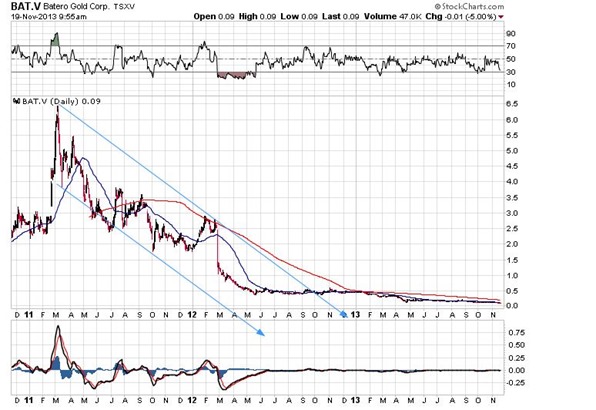 This company has strong financials, robust prospects and is situated in one of the most promising mining areas of Columbia, right next door to Ashanti (AU) and Seafield (SFF.V). Had you invested in 2008 when this company started its life in this form, you would have been very rich by the time the stock peaked in March of 2011 at $6.50. Had you bought then you would now be very poor. This is what is known in the market parlance as timing. You will always be told that timing the market is a fools game that you should not indulge in. We think that you are being foolish if you don’t.

At 9 cents this thing is down about 98.5%. It is instructive to recognize that , despite that, the stock can still easily drop another 50%. This is financial math that is different from normal math. But if there are fundamental reasons to believe that this stock has a viable future, than buying low and selling high, that is timing the market, makes a lot of sense.