2014 in 2014 is the latest prediction and we will be hearing much higher levels soon. However, not everyone agrees. A good example,short and sweet and very much to the point can be found at  http://www.crestmontresearch.com/docs/Stock-Nightmare.pdf  Properly titled “Nightmare on Wall Street” and written by one Ed Easterling, this is well worth reading.

We will try to make the same point using EW (and other technical approaches) on the SMI, the Swiss Market Index. The choice is random but it seems to work very well using the famous “gnomes of Zurich” operating from a country that nobody has ever accused of being cheap. The index consists of the creme de la creme of bluechip stocks, Nestle being the most prominent. Here is the chart; 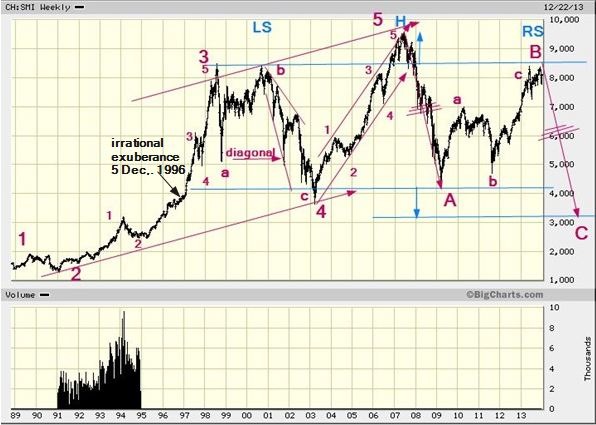 Like most other indices the SMI has had 3 tops over the past 15 years or so. In this particular case we will chose the mid top as the top. The simple reason is that it looks good and saves me the trouble of having to find an excuse why the highest point might not actually be THE top. From ‘91 to ‘98 this index, like so many others, grows 8-fold prompting the Maestro to utter the now famous “irrational exuberance”, despite later claims that detecting a bubble in real time was impossible. Today, we are at these very same levels, now roughly 21+ years later. To get from 1000 to 8000 in twenty-one years the index has to double every 7 years (that is 3 times or 2x2x2=8).  The rule of 72 tells you that this can be achieved only by 72/7= 10% per annum, compounded. This is rough math as I have lost my slide rule. So despite not doing anything for the better part of 14 years this index has nevertheless achieved a respectable return of 10% for 21+ years. So where is this going in the future? Down.   In EW terms we have completed a B-wave (as in so many other indices, see CAC , DAX, etc.etc.) so C is next going towards 3000 where the 4th wave of previous degree resides.  Also, it is a well known fact in EW that after an extended wave, the retracement typically goes to the top of wave one of that extension, here just a little above 3000 as well.If you adhere to the Head & Shoulder structure 3000 is your target as well. Regression to the mean would point to even lower levels if you stop to consider that it took 100 years to get to 1000 to begin with.

For the record, we have not changed the outlook from a year ago, just tweaked it to clean out a few minor imperfections, see chart below from precisely a year ago. Also another 1000 points or so is not entirely impossible but that is where the above article comes in. In the Head & Shoulder structure things would be more symmetric if one assume that wave 3 coincides with the LS. This can easily be achieved if the entire a – b – c wave 4 is deleted and the diagonal changed to a simple zig-zag a –b – c down. In this scenario wave 3 of 3 would be the extended wave up and the target would remain unchanged at 3000, or possible even lower, at about 2000: 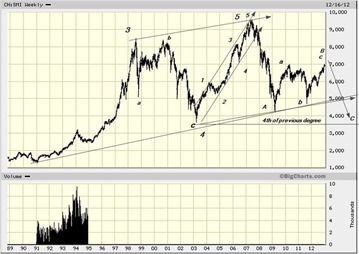