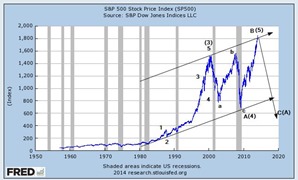 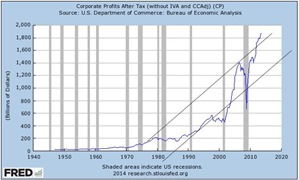 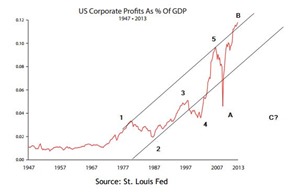 There are three charts here, all from the St.Louis Fed. Reserve Bank, the self appointed statistician of the 12 banks. Top is the S&P, beneath that corporate profits in absolute terms and to the right of that the same thing in proportion to GDP (Gross Domestic Product), both measured on an after-tax basis..

It was not that long ago that a very well regarded economist figured out that there was an almost perfect correlation between, I believe, whooping cranes flying over the Rhine river and Mercedes-Benzes sold in Stuttgart. Here we have something similar but with a much higher degree of plausibility.  The economic value of a stock, or anything for that matter, is in its simplest terms the discounted value of all future profits/earnings that accrue to the owner (as opposed to some level of government through taxation). As a result of reductions in corporate taxes, accelerated  depreciation, offshoring income, globalization and a myriad of loopholes – apparently it is now possible, in North Dakota, to create a trust that will , perpetually, postpone the recognition of income provided it is not taken out , no more 21 years max, no more succession duties and all those other nasty things; a wealthy dynasty builders dream come true – corporate after tax profits have gone through the roof ( proportionately 6x as much as in the golden days of the sixties!). At the same time interest rates have gone down and stayed low substantially increasing the present value of any income stream. By one estimate 98% of the beneficial impact of the various QEs that we have had has accrued to the top 1% of the population. But we are always told about the dire consequences if the Fed. had not stepped in. This “shock and awe” approach has the enormous advantage that no proof is ever required.  With regard to the correlation, it is clear that , numerically, both the S&P and the corporate profits start at about zero and end at 1800. Moreover each wiggle in one chart has a corresponding wiggle in the other, all though, in one instance, the amplitude is unequal. The hypothesis then is that, for the stock market to go higher, corporate profits will have to increase roughly by $1000 bln. for every 1000 S&P points. We put the probability of that happening consistently over the next few years at near zero because;

1. Interest rates cannot go negative so ultimately up is the only path left.

2.Equality of incomes is so lopsided that in some circles there is recognition that this is a major problem.

3. With a trillion $$ deficit it is hard to see how the US could cut taxes further.

4. There is no growth anywhere in the world worth mentioning.

5. Keynes remarked that in the long run we are all dead. Perhaps he had his own theories that now have a cult like following in mind when he made that observation.

6. Global warming is not accepted by the flat-earth majority, but increasingly the effects are starting to show up everywhere. The costs will no doubt be enormous.

7. Entitlement programmes, most barely 60 years old and a lot less in their present form, are already bankrupting major parts of both the government and private sectors.