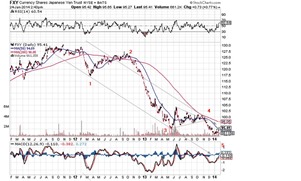 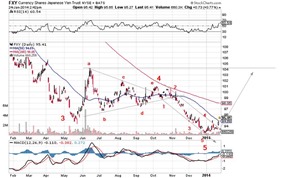 We have done only a few bits and pieces of analysis on currencies despite half a career spent precisely on that. The reason is simple that it is not clear that EW should work.  As the reader certainly knows by now under EW 5 waves is up and 3 waves is down. This works just fine if you work with absolute values, not if you work with relative values. 5 waves down in New York also has to be 5 waves up in Tokyo, not 3, so it cannot possible work. Nevertheless some patterns do show up in FX frequently, in this case a triangle in the Yen (against US dollar). Triangles always occur in the 4th wave position and therefore they are a clear warning that things will turn around.

At about 130 to 127 Abeconomics comes in vogue in Japan. It is announced with a great deal of fanfare so the markets accepts the direction (yen down) with almost total certainty. So every bank, hedge fund, very rich individual etc. and his or her brother borrows the stuff by the truckload and then leverages it 2 to 60 times and buys US treasuries or other Government paper. This takes very little capital as even the banks get near zero haircuts for Govies. So if you are wondering who the idiot was that bought  10 –year US Gov. Bonds at a yield of 1.6% a year ago, here is your answer, and it is not that idiotic either. The Yen has gone from 130 to 94, most of it in the last year and a half, almost guaranteed!! The more the better.  But at year end things changed and now things look like they are running in the opposite direction. Our target for the yen, given the triangle, is 104 which, from 94, is a colossal move that has the potential of affecting everything that was bought on the other side of the trade. The turmoil in the markets for the past few days may just be like a picnic in the park once the “carry-trade” starts to unravel in a serious way. Thank you central bankers all over the World for making all this possible. Beggar-your-neighbour policies are now back in full force, Canada and its dollar are excellent examples despite the fact that the Canadian Central Bank does not have a mandate to pulverize it’s currency.