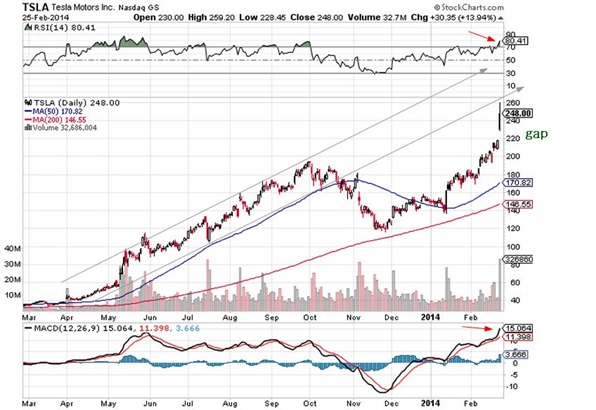 Clearly we got this one wrong. The wedge did not stop and just continued in a rather explosive way. Maybe we are in a 3d wave of sorts and still have a way to go. In the mean time there is an analyst who just doubled his target price to, I believe, $340. The fundamental thinking goes like this. This company makes cars, that industry is X billion worldwide so if they can command a certain miniscule fraction they will do very well. It is also, by way of the batteries – once enough of these cars have been built their batteries would hold a charge equal to the entire consumption of Mexico – a utility. That industry is a 10X billion industry and if the company can command just a small fraction, it will do very, very, well. Then they will also be in the forefront of electrical generation, by way of solar etc, which is a big and growing industry. If they can capture just a small fraction the company will do exceptionally well. You get the picture.

For the moment we still do not know who and how many are willing to fork over close to $100,000 for a car, even if it was recently nominated “best of breed”.