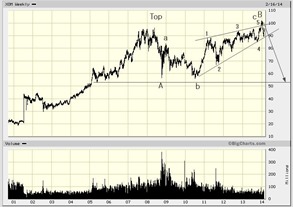 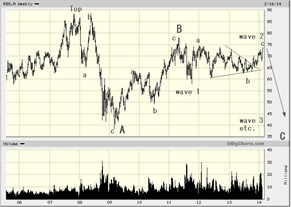 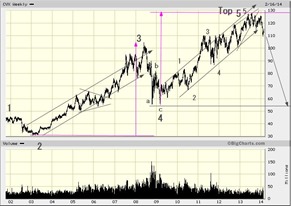 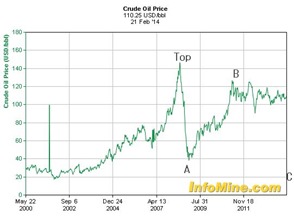 All three yield about 3% and have p/es of about 10x to 13x. Royal Dutch is the only one to have a perfectly clear B-wave, but then it also consumes an inordinate amount of time (4 years) doing nothing. Exxon sports a clear wedge (as the c in the B-wave) which is equally bearish. It also does that Mnt. Everest thing by climbing to just over $100  and falling back from exhaustion. Chevron  is the only one of the three that (arguable) has a 5th wave going into the recent top. 5th waves are normally completely retraced (and then some) during the next retracement. What all three have in common, at least using EW rules, is that they are about to lose 1/2 of their value.

Interestingly, only Royal Dutch resembles the actual movements in the value of crude oil. Of course these are integrated oil companies so there is no compelling reason why they would track the stuff all that closely. But other than Fed. policy there is also no compelling reason why the American oil giants should outperform. BP, by the way, is still trading at about 40% below its peak. It resembles RDS.a but at much lower relative values. It yield about 5% and trades at a p/e of 7x. On a relative basis it might actually be a buy. It is the only one that may have completed an A-B-C correction (or a more complex A?) as can be seen on the semi-log scale chart below; 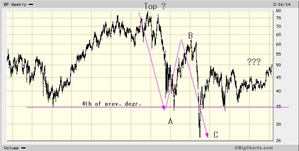