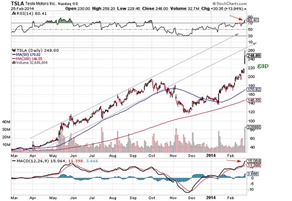 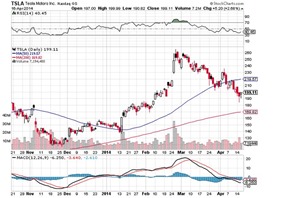 The usual “then & now” charts, then being Febr. 26 2014 and now, you guessed it, today. The beauty of EW is that when you get it wrong, you usually are very wrong but at the opposite end, when it works you can hit the nail precisely on the head. After a few tries this is exactly what we have here.

All high-beta stocks – those that have a wider amplitude when they swing – have been hurt badly in the past month. The Russell 2000, the Nasdaq, things like NFLX, VRX, and also Tesla Motors. It dropped about $80 or close to 30%. Many of these stocks have absolutely nothing more than momentum going for them which is probably why they go well beyond what might be considered “logical”, as if there is such a thing in the stock market. My guess is that this is the end of the ride for many of these stocks. The damage is just to great to allow them to rise again. It should not take to long for the losses to spread to the “blue chips” such as IBM.