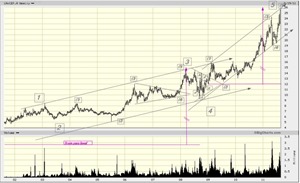 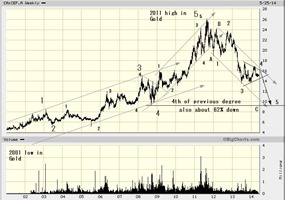 Almost three years ago the implied prediction contained in the EW count was that this fund should fall to about $10. This is the level of a 4th wave of previous degree and also the approximate level where the fund would retrace about 62% of the entire run up from the lows of 2001 to the highs of 2014. So far we have not done that yet so the possibility still is very real that we will. The retracement from the high of $26 should unfold as an A-B-C. What we do not know is how complex a shape it might take. A rough guess would suggest that the time down should be about  1/3 to 1/2 of the time spent going up. So somewhere between 3 to 5 years. The A-B-C shown in the chart fits the best. If correct we are presently in wave 4 of C.

This outlook does not contradict what one might conclude from ABX or Goldcorp. In fact a small e up now to complete the triangle would fit quite nicely with ABX which is now down by at least $5 since we suggested it was a sell.