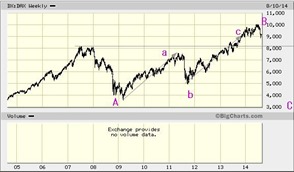 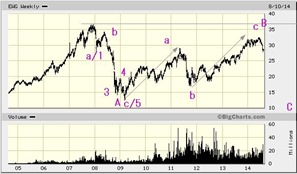 Here we have the DAX, Germany’s main stock index and the Morgan Stanley IShares EWG. G, of course, stands for Germany. Why both? Well, I have noticed that often comparisons are made between the DAX and other indices , for instance the DOW, without regard to the type of index. The DAX is not some sort of über index that outperforms most of it’s peers, instead it is simple a total return index as a result of which it will normally show a higher value at most points in time. It has a base in 1987 at 1000 and for each year that passes it adds the dividend to the capital gain/loss to come up with a value. As with the DOW, there are 30 stocks in this index most of which are also represented in the EWG.

Presently the yield is roughly, very roughly, 4%. Since the highs of 2007, seven years have passed so, applying the above, very roughly again, the DAX should be higher by about 28% than the EWG is, not including compounding. In fact it is!

Having established that, what does it matter? A lot. Using the DAX Canadians are misguided into believing that their economy is inferior to that of Germany and that the proverbial  “Wirtschaftswunder” has passed it by entirely while we were building F150s instead of Benzes. Not so as you can see at a glance on the chart of the TSX; 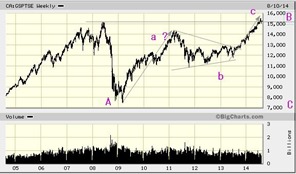 When the TSX is compared to the EWG, and not the DAX, the TSX actually outperforms relative to the 2007 (or 8) peak. You will notice that the two charts (you can move them around) are, again roughly, identical and both are clear B-waves that are signalling that a wave C is just around the corner. However, this time, it does look as if Germany is in the lead.