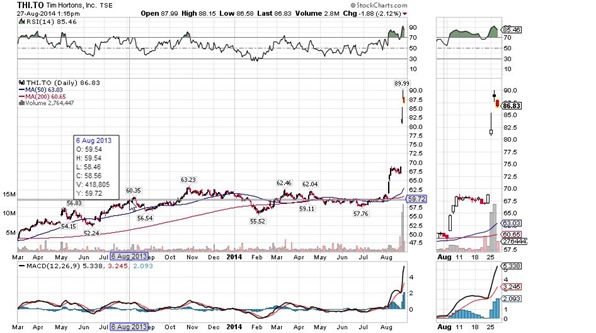 Tim Hortens is an interesting case. From the chart it is rather easy to notice that for at least a full year the coffee did very little to perk up the stock. The keen observer will see that the stock barely had a pulse and gyrated continuously between the extremes of $63.29 and $55,52, a range of $7.77 or $3.88 on either side of $59.40. For the most part the range was appreciable narrower.  This is against a back-drop of the TSX moving from 12500 to 15600 or roughly 25% over the same time interval. Precisely on Aug. 6, 2014 the stock shoots up about $8 in 4 working days and a good two weeks before the deal  with Burger King became public. BKW itself did not have such a clear move but that is not surprising as economics 101 teaches the arbitrageur to go long the target and short the predator – which ,by the way, is usually correct unless you are in a bubble where anything goes. But then this is no arbitrage, instead it has the smell of insider trading. Where is the leak in this cup? Brazil, Oakville, Omaha or from anyone of probable a few dozen advisors? In Canada we will never know as we are naive enough to believe that the insight was obtained from under the rim and in the meantime every second politician has already applauded the deal.