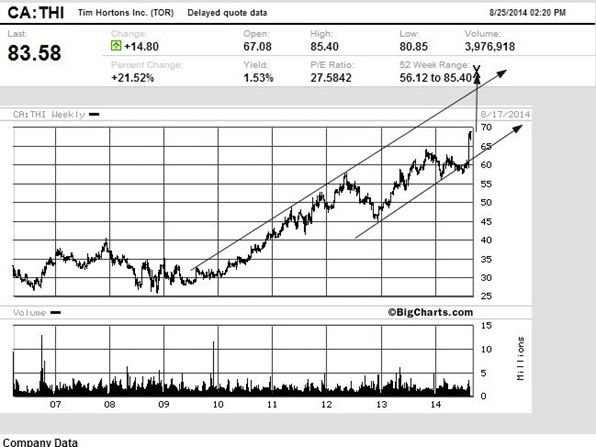 The company may be taken over, or is that merge ?, with Burger King.  At $9 bln or so each they are almost equals. How culturally Canadian coffee and American hamburgers fit remains a mystery (as with Wendy’s), but then the point, if this actually happens, is to create one of these now infamous tax-inversions that would allow both companies to enjoy the lower corporate tax rate which just happens to be Canada’s. In the news comparisons are made between US 40% and Can. 26% even though I thought our rate is, or soon will go to about 15%. In the US the actual rate is usually much lower and probable more in the order of 30% or less. So let us assume a difference of 15% which would apply only to 1/2 of the new company as the other half already enjoys this benefit, so the saving is about 7+%. Despite that both stocks are up by about 22%, or three times as much. Does it then follow that the stock is overvalued?

Tim Hortens trades at roughly a p/e of 30X, Burger King at about 45X so, apart from the fact that there are no overvalued stocks when rates are zero, these very modest p/e ratios indicate that there is potential still. A quick look at Starbucks, SBUX, below, shows how much; 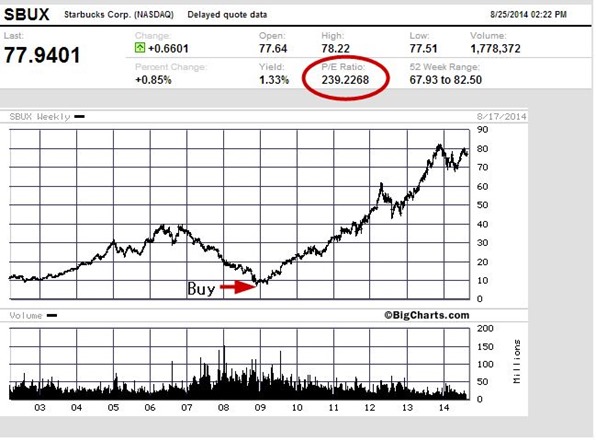 For Timmies to get to this level the stock can rise to $752. The real question is actually if it would not be better to invert the other way as these are American dollars worth an extra 10%. Just remember the old adage, Buy the rumour and sell the fact.