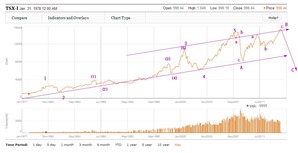 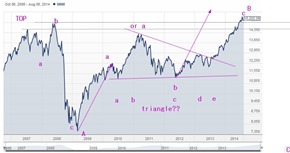 With the TSX we can be reasonable confident that the “orthodox” high and the actual high are one and the same and that it occurred in 2007, this in contrast to, perhaps, the DOW. The count, despite some ambiguity perhaps with respect to the subdivisions of wave 3, also appears to be fairly straightforward. On top of that it is quite clear that the rise from the lows  of the Great Recession in 2009 is most definitely not a 5-wave structure but a 3-wave, corrective counter-trend affair. How it subdivides is debatable, as is the question whether or not it has peaked. With respect to that last point it is clear that we double topped and then some, and also that for the past 3 or so years we accomplished very little in terms of additional height relative to the 2011 top of the a-wave.

There is nothing from an EW perspective that would suggest that this index could not go another 1000 or so points higher (that is where the parallel upper trend line would run if drawn through the top). However, given what is transpiring in other markets it is highly unlikely that Canada can continue to do it all on its own as it has been doing the last little while. The 1000 extra points is not worth the potential loss of 7000 or more points should the C wave down start momentarily.  When in doubt, get out.