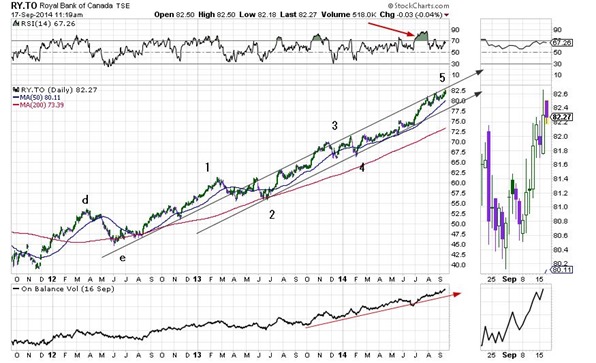 $82.50 was as high as we expected this stock to go; this on account of the fact that a 5th wave cannot be longer than a 3d wave when that 3d wave itself is already shorter than wave 1. Briefly it got fractionally higher than that but only by the smallest of margins. Today it was not able to repeat that feat, so far at least. The RSI peaked a few months ago and the OBV, On Balance Volume has no more room left to go higher. This is a sell! Today Yellen will confidently pronounce the World to be flat ( the world of yield-curves, that is) and with that she will undo 500 hundred years of progress since Copernicus formulated a model of the Universe that did not have the Federal Reserve at it’s center. Ironically this same Copernicus fellow was one of the first to formulate a quantity theory of money (back in 1517!) which, with a little massaging and torture, became the basis of the Gresham’s adage that “Bad money drives out good money” as in the US$ and gold. This time the world may not buy the narrative any longer. At least we now know what a “considerable period of time” is.