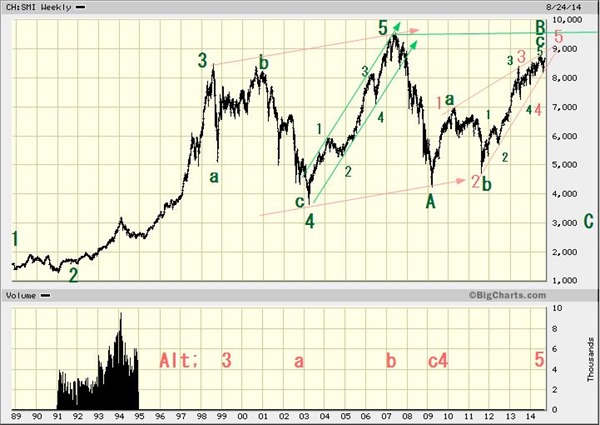 Once again we are confronted with a situation where the stock moves over the past 16 or so years can be interpreted in different ways. The, to me, most acceptable labelling would have the top in 2007- primarily because the move into that top looks like 5 waves – which would make the rise from the lows of 2009 a wave B. B waves can retrace the entire preceding down move, they can exceed that or they can fall short of reaching the “double top” level. Presently we got to within 500 points or so of double topping so that does not add any further insight.

Alternatively (in light red) the top has yet to be made. The wave 4 would have started in ‘98 and ended in ‘09. The present leg up would either be a normal 5 wave affaire (needs a 4 and 5) or a wedge (essentially complete).

Interestingly the implications of both interpretations are essentially the same and therefore the distinction is, other than for EW purist, immaterial. Either way the next big move should be down.

P.S. The Head and Shoulder people must be salivating just looking at this chart,see below;