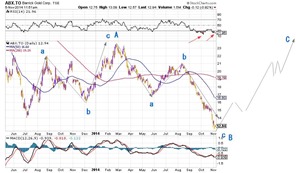 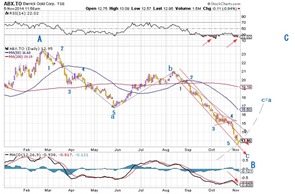 Back on Febr. 3d we recommended selling this stock at about $22(saving you 40+%).The reason was simple that there we had a near perfect a-b-c up. We left it alone for the better part of half a year which is the hardest part. When I was working on the institutional side I once explained to my boss and president that most of the time he was paying me to do nothing. Perhaps I should have elaborated as , in hindsight, he obviously did not understand.

In any event here we are at an exactly similar juncture. Another a-b-c, this time down, may be complete at these lows, give or take a millimeter. The market loves harmony and symmetry and here it is again. Of course this could just be part of a wave 3 followed by a 4 and 5 much lower but that would bring the stock to a ridiculous level close to zero. Furthermore the RSI and MACD are also suggesting an imminent turn.

Interesting in this regard is a Swiss referendum on November 30, just 3 weeks away. What it proposes is, in essence, the return of the gold standard at least for about 20% of the money outstanding, basically where it was more than a decade ago before the Swiss Central Bank started selling the stuff at rock bottom prices (Just like the boys and girls on Threadneedle Street). If it passes, and there are indications that it might, it would not only be a major embarrassment for the authorities who have steadfastly opposed such a move, but it also would require Switzerland to buy something like 2/3 of the annual world production on fairly short notice. In short fireworks soon is a distinct possibility!

On the basis of the XAU, we are definitely close to our original target, set a long time ago, of 60. It’s low today was at 62 and a bit.