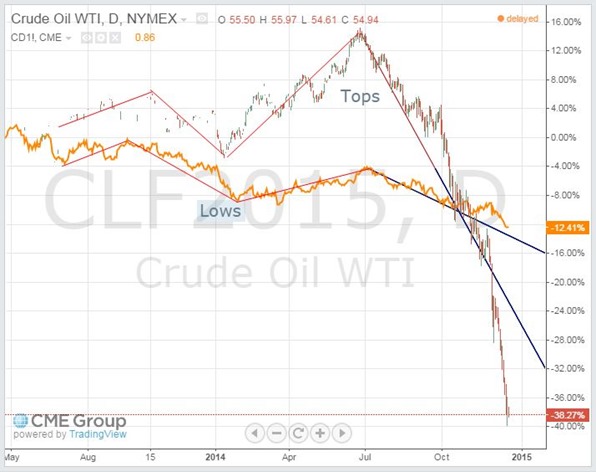 To answer this question we use the scientific and accepted method of correlation analysis, but skip the R-squared stuff as that is too mathematical for most. But let me begin with saying that I love the BofC, in fact, back in the late eighties I was close to getting hired as the bank’s FX representative in Toronto. That fell through due to a government hiring freeze – they were only allowed to hire from within – so I lost out to some IT geek with zero experience. Life would have been so very different. Also I have always admired M Carney as one of the very few, non bureaucratic or politicized, governors. But as is so often the case, his tenure was shortened by his success, not a usual experience for someone in that job.

The above chart shows the Can $ currency against WTI oil. It covers less than a year but if you were to use longer charts the conclusion would be presented even more forcefully. As is immediately clear the C$ and Oil move in tandem. We now have a PETROCURRENCY. (The petro stands for petroleum which is old-English for what we call gas on this side of the pond, this despite the fact that the town of Petrolia is right here in Ontario). Most Central Banks have it in their mandate that they must defend the value of their currency. For open economies that boils down to, for a good part, controlling the exchange-rate. Not, by the way, in America where this task actually is the jurisdiction of the Treasury, not the Fed.  Our currency now appears to be a function of the value of oil and not of the policies of the Bank of Canada, so the answer is, Very Little.