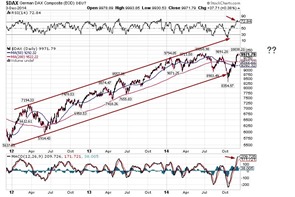 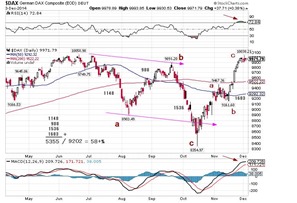 The DAX index has had a remarkable performance over the past 3 years and the past five + months, respectively almost doubling and gyrating to the tune of 58% around its average value for that period. Such gyrations can only be the result of an unstable equilibrium that tries to adapt to short-term unmeasurable  and capricious inputs from Central Bankers and the like. Applied to the collective and binary brain of the investing public, that thinks not at all anymore, and behaves more like the iconic herd of stampeding steers that has made (bankrupt) Merryll Lynch Pierce Fenner Smith so famous. This has nothing whatsoever to do anymore with how well Mercedeses are selling. By the way, the DAX is a total return index and therefore not directly comparable to, for instance, the DOW.

From an EW point of view , we do not claim to fully understand what count is applicable. What is clear is that the rise from the lows is more clearly an a-b-c corrective structure than an upward bull move. That point is driven home more forcibly if you look at EWG, the German ETF that contains many of the same stocks as the DAX. 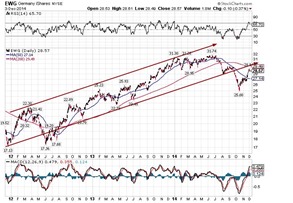 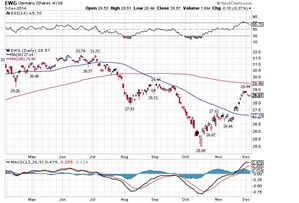 This is a downright bearish chart. As with the one above the RSI and MACD are already warning of the possibility of a downturn, but, more importantly, the EWG has only recouped about one half (60%) of the previous losses.

To add to the confusion we include the AEX, the world’s oldest exchange index. It has made two consecutive new highs over this period and they do not even make Mercedeses there. 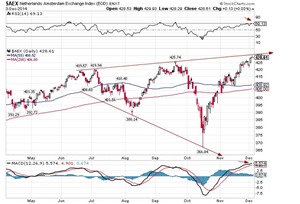