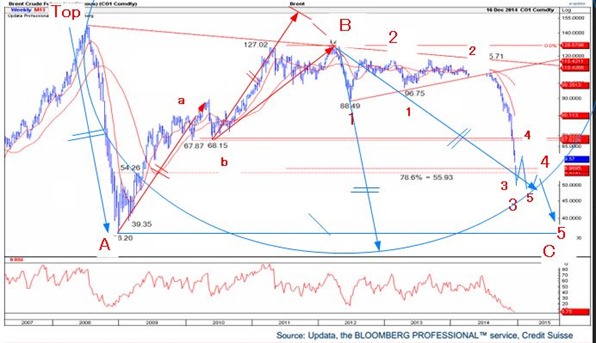 This is meant to be a roadmap for where oil might, repeat might, go in the future. This is a chart of the continuous future contract and values may differ considerable from spot prices! In any event the BIG PICTURE here, as with most everything else is than of a large A-B-C flat in EW terms. Most often the C wave ultimately reaches a point that is below the terminal point of the A wave. However if it takes an inordinate amount of time, vector equality between A and C sometimes suffices. An example of that is between the a and b legs of the B-wave, see the red arrows.

A lot of time, about two years,  was spent going nowhere while oil stayed in a suspended state between $120 and $90. These were, we think, a series of 1-2’s that now will have to find their corresponding counter-part at the bottom in the form of 4-5’s. C waves as a whole should always be composed of a 5 –wave sequence. If the 4-5’s will also take two years remains to be seen. In fact the whole roadmap remains to be seen but at least here there is something to focus the mind on.

Incidentally, the various inflation charts very much resemble this oil chart but then without the extremes. That is not so surprising as deflation may well be the cause of both and also, by the way, gold.