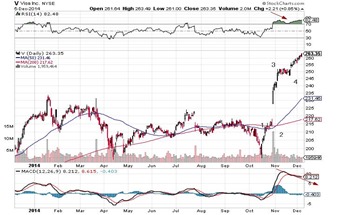 At about the halfway mark we thought this was a sell. That was a terrible call. Now, with hindsight, it simple did not interpret EW properly.

Here we are again, all the way at $264, and we think this stock is at a top. It has done 5 waves from the lows of about $40 back in early 2009. Waves 1 and 5 are about equal which is normal when wave 3 is extended. There  is alternation between 2 and 4. The RSI is way overbought and the MACD has already turned down. Fundamentally if you view Visa, Master Card etc. as just a toll on commerce it is hard to see why such a stock should grow much faster than the economy as a whole. Yet in just two weeks in last October it added more than the stock was worth after the Great Recession.

The stock yields 0.73% and trades at a p/e of almost 32X, that compares to 13.5X at a financial institution such as Wells Fargo (WFC). Of course if one assumes that interest rates will stay forever at zero, then this stock (and all others) is grotesquely undervalued. We do not subscribe to that and would sell this stock short. The initial target would be just under $200 and a lot more after that. A June 2015, 250 strike put option trades for about $10.