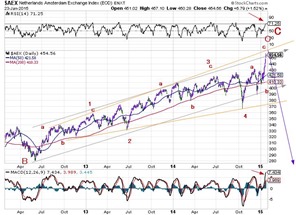 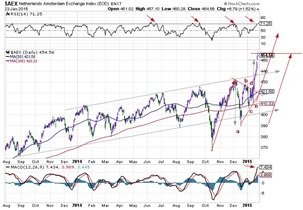 The AEX , being the oldest,  should be the wisest, and tell us where we are.  Most of the others, as for instance the CAC, DAX etc. have similar patterns except for the FTSE and MIB. We do not think that with all the ups and downs anybody can claim to be able to count this chart in a serious way, but with the benefit of hindsight it is possible to come up with something plausible. In this particular case a rather ugly looking expanding diagonal (read wedge) seems to fit the bill. It is a 5-wave structure with each and every leg consisting of 3 waves, whether up or down, and having an increasing amplitude (see beige lines). This one is really ugly.

If that is the case than the triangles we have seen just about everywhere may be b-waves rather than waves 4. Assuming equality between waves a and c of this last leg up 465 looks to be a reasonable target, not including the always possible “throw-over”. That, by the way, would constitute a 30% increase , more or less, in three months. Paradoxically, Draghi who should get full credit for making this possible was less successful in his own country, see chart below of the Milan index.  Looking at the RSI and MACD the overall conclusion must be that we are awfully close to a top. 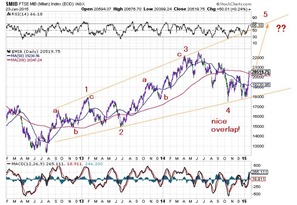