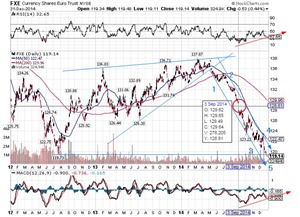 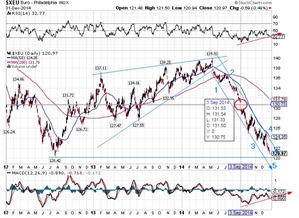 As pointed out previously, year-ends are focal points for the markets and it is therefore not unusual that changes in the course of events occur, more or less, at that time. This is particularly true for foreign exchange rates. Here we have the Euro by way of either the FXE or the XEU, we actually prefer the latter but recognize that neither one is a true representation of the real FX market, if for no other reason than that FX trading never stops as it moves around the World. Gaps do not exist in this kind of an environment and are created only by the artifice of a straightjacket that we impose on it by insisting that it fit our timetables. Here we have a gap in each of these charts and using the tried and true gap-in-the-middle approach it is clear that we are done.

Furthermore, the largest part of the move up in 2014 can best be described as a diagonal or wedge in EW terms. Typically these retrace to their starting points. Add to that that the RSI and the MACD are decisively suggesting a turn at about this time. Fundamentally, there was a time immediately after the Great Recession that everybody simple new that the US dollar would be pulverized by excessive money creation by the Fed. Everybody simple got that one wrong. Now, with equal zeal , everybody professes to know that the US dollar will continue it’s upward trajectory at least through 2015. This too may prove to be simple wrong. If for no other reason this 120-ish level poses a lot of resistance so a reversal of sorts would not be all that abnormal. See somewhat longer chart below; 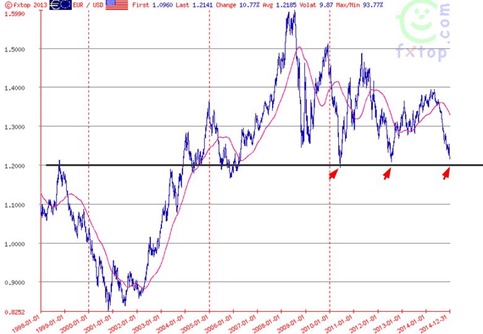 Just to be redundant we have added the March Euro future below; 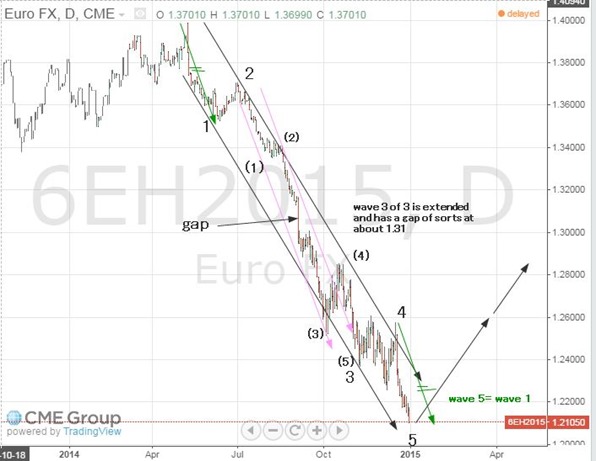