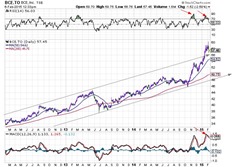 Apparently the stock was downgraded today by one or two dealers. This is very unusual as this is one of the few remaining blue chips in Canada and investment dealers do not normally quarrel with success.  However they may be right!

Like our banks this company has had a monopoly/oligopoly throughout it’s existence. It is the largest of three and mostly the price-leader. It is very well politicized and serves quite often as a career destination for high ranking civil servants that are in need of a boost to their pensions. You will not find this company on any list of the best managed enterprises ever.

EW tells us something is brewing. Notice that in the G&M chart on the left, wave 3 and wave 5, if that is what they are and we definitely think so, are almost the same size. Except perhaps for commodity based stocks it is unusual for the 5th wave to be longer than the 3d. If you have to assume anything at all than it would be that the 3d wave is the longest. Effectively that limits any further upside. So does the upper trend-line.

In the more detailed chart ( I can only get 3 years without paying) the peak value at $60.20 looks like a throw-over, the last gasp of exuberance. RSI and MACD also both suggest a turn is in the cards. This is definitely a sell here.

For those that have an ACB of a few dollars and are enjoying the dividend income that is more than 3x what you get on a Can. 10-year bond, a different strategy might be more appropriate. That, by the way, goes a long way in explaining the blue chip status.