See also a previous blog on this company. 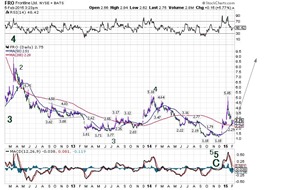 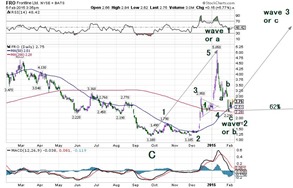 Frontline has quite a few VLCCs in its fleet and there is a glut of these ships and more on the way, consequently business has not been all that good as is obvious from the stock that has fallen from a little over $70 to almost a single dollar. However since October of last year the stock has shot up almost fivefold in a few months. Why? Oil.

These things carry about 2 million barrels apiece and used to cost about $35,000 to $40,000 a day to lease/rent (including crew and fuel). Oil is in contango, that is the price down the road is higher than the spot price .  For instance today (see http://www.cmegroup.com/trading/energy/crude-oil/light-sweet-crude.html  ) the spot price  or march contract is trading at $50.84 and the Nov. contract at $58.27, a difference of about $7.43 and 240 days. You buy 2 million barrels spot and sell them forward for a gain of $14.86 million. You have no position in oil so you run no risk on that score, but you do have to put the stuff somewhere. Rent a VLCC, at $35,000 a day that comes to $8.4 million. Take home pay  is about $6.5 mln (before interest costs!, where applicable) for doing absolutely nothing. As every other oil trader and his brother have this figured out all the time they bid up the rental of the ship to $90,000 per day and the stock shoots up.*

By the looks of the stock it would appear that an initial 5-wave 1st wave was completed followed by a wave 2 or b. We would expect at least a c wave or a wave 3. A target, if c=a would be around $6.25 but in the event this is a wave 3 it could go to as high as $9.

Obviously this kind of trade, done either with futures alone or by the actual purchase of oil serves to “flatten” the oil curve. That the entire opportunity is not arbitraged out completely is the result of a lack of storage space, either on land or on these VLCCs.

* In this example the trader would not bid up the rent more than to $62,000 as at that point he would start losing money. But it does not have to be for the whole 240 days.