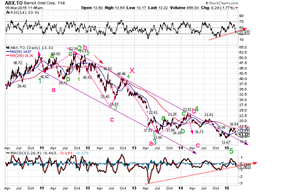 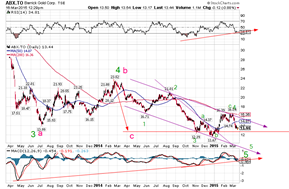 This weekend  all of a sudden you could get 5 year charts from Stockcharts.com. Perhaps this is only a temporary expansion of their free product line but it is welcome in any event. ABX is starting to become extremely annoying as it simple will not show its hand conclusively. It has almost been 1/2 year without either confirming or negating a particular scenario , count or outlook. That is not helpful.

However, on the positive side we have at least the possibility of a completed EW pattern if we make a sharp wedge of wave 5. The $11.67 low would be the low and now it is just a matter of time. Both the RSI and the MACD have improved over time and suggest  a decent bull run could be in the cards. Symmetry, a frequent occurrence, would suggest a low just above $12 (see red line); we have already gone a little beyond that. The long and short of it is that we think it is a good buy here once again but we cannot exclude the possibility of a spike down to $9 in the worst case.

Both the XAU and HUI have similar patterns except that they are sporting triangles which makes it more certain. But both start of with a mess which could be a series of 1-2’s so you could expect 4-5’s at the bottom. 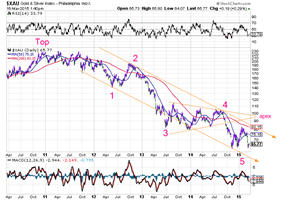 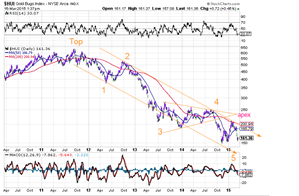 The XAU came to within a dollar of our longstanding target. It’s top is earlier than the HUI and it is messy sugesting a series of 1-2’s.  The HUI is much cleaner but also seems ton have a wave too much at the top. All should be a buy here given that a 40% retracement – the standard minimum – should outweigh any further drop should it occur.