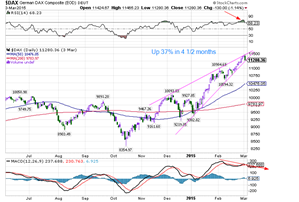 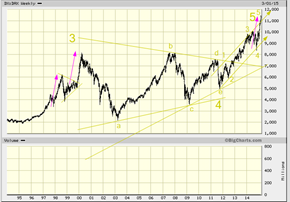 The Dax’s performance is absolutely fascinating. At the recent high of 11465 it was up 37% in 4 1/2 months. In a very crude way I have figured out that there were only three previous occasions where the Dax may have performed in a similar super bullish fashion. The little purple arrows, all equally long (but this is not a semi-log chart!) indicate where and when those events might have occurred. In every case it would have been a 5th wave ( but not always the same degree). In both the two previous occasions the advance is immediately erased! They are separately shown below; 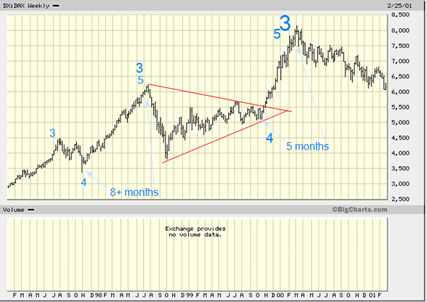 Only the one starting in late ’99 and early ‘00 is comparable in duration and size (smaller in absolute terms but bigger as a percentage). It too appears to be a “thrust” out of a triangle and peaking just above the apex. Note that after that peak the Dax has it’s biggest drop ever, both absolute and as a percentage, losing roughly 3/4 of it’s value.

Will history repeat itself ? Mostly it does as otherwise pattern recognition would be a useless endeavour, which , perhaps , it is.