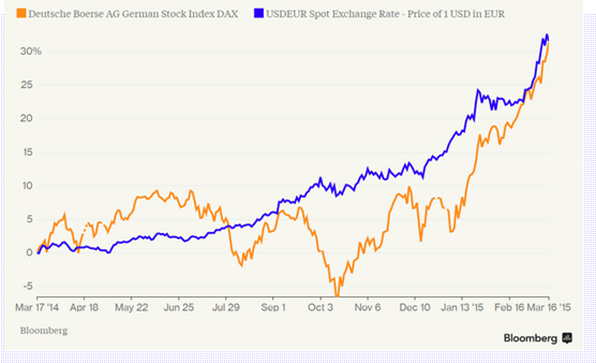 We happened upon this particular chart on Bloomberg that we thought is instructive in these modern times in which QE, in one form or another, is the rage. Currency swings have been around for a long time and were often larger in magnitude than they are now. For instance in the mid-eighties US$/DeutschMark moved from 3.50 to 1.50 and back again in a little over a year. Sterling had similar swings earlier and our own Canadian dollar has moved from 1.04 to .61 to 1.10 against the US$, albeit over an appreciable longer period of time. Yet the respective stock markets did not appear to have the large gyrations they do today. Perhaps this time is different as most capital mobility constraints have long gone and we now have a huge pool of “homeless” (hot if you prefer) money sloshing around.

The recent  rise in the Swiss Franc caused by the Central Bank abandoning the currency peg, led, initially at least, to a corresponding drop in their stock market, see below; 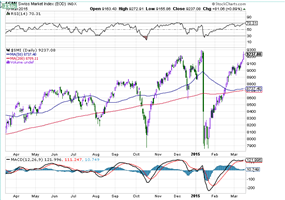 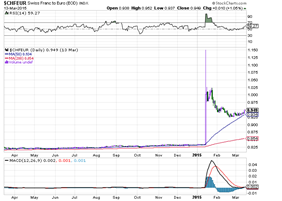 Because one event occurs immediately after the other we will use the post hoc ergo ….. fallacy to assume there is not just correlation but causation, even if in this particular example it seems to dissipate rather rapidly to contradict that same assumption. Debasing the currency is, by the way, an excellent way of making the rich richer and the locals poorer.

Back to the DAX. If you are wondering what the leading stocks were to push the Dax up, they are Volkswagen, BMW and Daimler (Mercedes), all three big exporters and all three from an industry that was down and out not too long ago. Time to buy Peabody Energy (BTU) perhaps???