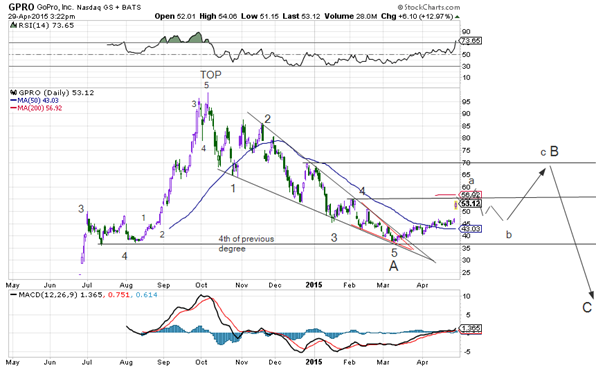 GPRO did not get enough attention. When it got to about $45 (where the 3 is) it could have completed an initial a-b-c down. However it continued lower and in March reached the level of wave 4 of previous degree AND about 62% retracement. The timing was also near perfect as the lock on the IPO stock was removed around the middle to end of February.  Clearly that was a significant low so a rebound was to be expected. We are getting exactly that. The other day there was even a nice gap. We are guessing that this is just wave a up of what will become, perhaps, an a-b-c rebound. The a should stop around the 200 day moving average, roughly $57 or so, then the b should erase about 1/2 of that, about $10 to $45 or so. Then the c can take it up to around $70. That would be the tradable move that we would wait for, provided things unfold as we expect.

This stock must have read the book on EW as it is behaving accordingly. The ultimate low may be around the issue price of $24 or even lower but that is of no concern for the tradable leg we have in mind. This time we will keep an eye on it.