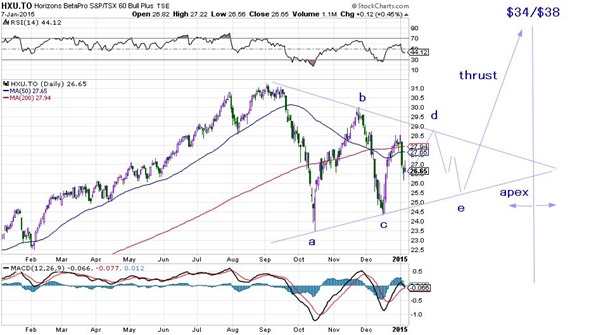 This was our take on the HXU back on January the 8th. We do not take credit for being prescient as, frankly, we had a hard time believing it. We show it anyway for the benefit of EW in general, that it does actually have predictive powers. Below is where we are today; 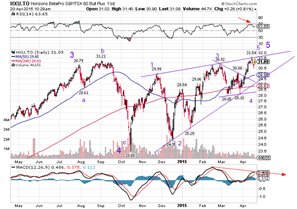 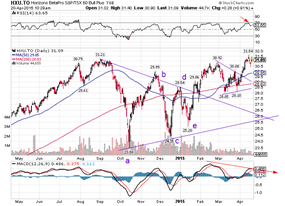 We show two charts, not because my readers are elderly, but because there are two, distinct possibilities. First that there was indeed a triangle, on the right, and that the thrust out still has a few dollars to go to get to the approximate $8 the triangle measures at the mouth, that is about $34 which is also a double-top level going back to early 2008. Secondly, that there never was a triangle, just an irregular wave 4 and since then we have been working our way up in a diagonal or wedge. Both scenarios allow for slightly higher levels but given the RSI and MACD I would not hold my breath. Note , by the way, that the suggested timing for a top is, ideally, about 4 months into this year. If you did, albeit by accident, followed the prediction verbatim you will have gained $31.25 – $25.50 = $5.75 , or about 25% if you wait a little longer. Soon it will be time to buy the HXD!

The TSX can accommodate both the above scenarios. It is no more than a good days trading away from double topping. 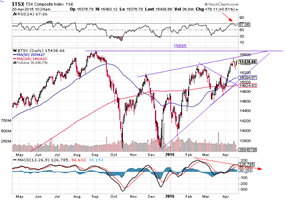