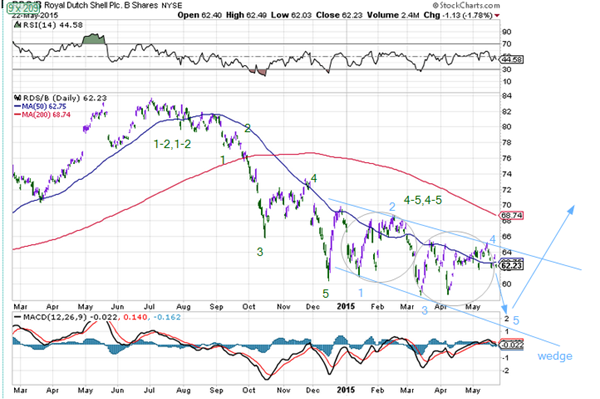 Essentially our approach, lately,  to this stock has been that you cannot go wrong being long. Having said that, we must confess not being sure of the exact count which , normally, should invoke the “when in doubt, get out” adage.

Our target, right from the beginning, was around $59 which was basically met. In the long run we do expect much lower values but there should be a substantial and tradable rebound in the interim. Because of this we expect the first big leg down (what you are looking at on this chart) to be five waves, for wave A, followed by a B rebound and then the C down to much lower levels.  In the above chart the 5-waves are quite clear in the middle from about $82 to $60.  At both ends it is a bit more precarious. We suspect that there was a series of two 1-2’s at the top. This should then result in two corresponding 4-5’s at the bottom. One way to ascertain that is using the guideline of alternation. When there are two very similar structures in succession obviously there is no alternation and this may point to there being a difference in degree! This is exactly what we seem to have. Alternatively there is a wedge. Either way this should be bought at $60 or less. For perfectionists $58 or less.

The alternative, that is an a-b-c X a-b-c double zig-zag correction is shown below. The target for either a zig-zag 5-3-5 explained above , or the double zig-zag is about the same at around $45 or a little lower. See below in beige, 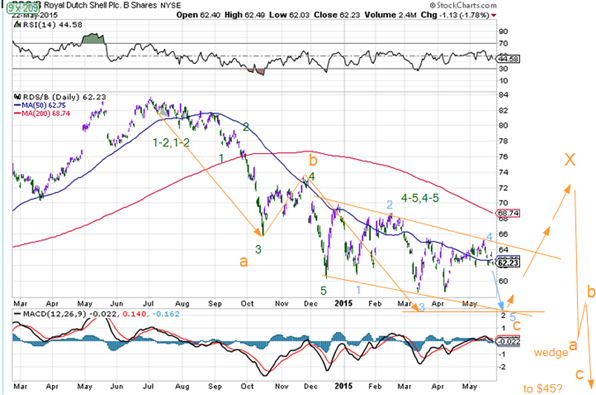