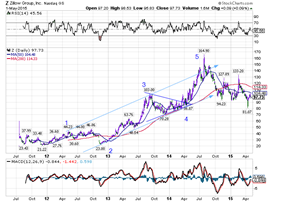 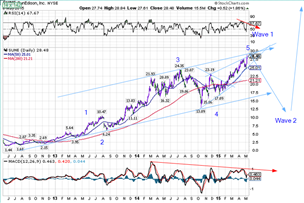 Zillow, on the left, is a relatively new company. They tell you what a property is worth if you put in the correct coordinates. This blog is NOT about Zillow!

SUNE is America’s largest “renewable” energy company. A lot of energy (electricity generating) companies are named after Edison in the US. It has been around in various forms for some time now. For the moment we are interested in the last 3 to 4 years only. Both charts display a pretty standard 5-wave bull market sequence, both in roughly the same proportions with wave 3 the longest or, at least, not the shortest and wave 4 probable a triangle. This, according to EW, is essentially how all stocks behave and more often than not it is easy to see “the picture” if you gloss over some of the detail. Once 5 waves are done you inevitable get a correction. Done, or mostly done, in the case of Zillow which IPOed  three years ago, not even started in the case of SUNE. Then the whole process starts again etc. etc.. It helps to know where you might be in this process. Looking at the big chart of SUNE; 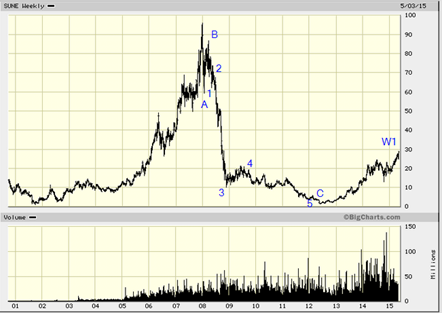 it looks like we are in a new bull market with a lot of potential but not before wave 2 is done, at somewhere between $13 to $11 or perhaps a little lower.